How to Survive a Recession Like a Successful CEO

If you want to know how to survive a recession, there’s no better resource to follow than David Cote, the former CEO of Honeywell.

During a drastic decline in economic activity, businesses must get creative to keep the engine running. Sone experts, such as New York Times economics, business, and data reporter Ben Casselman, are saying we could be looking at a recession period longer and more hard-hitting than we saw in 2008 or even the Great Depression.

In a recession of any degree, business leaders are forced to make tough decisions in order to keep their companies afloat, from cutting operating costs to adjusting people expenses.

When asked how to survive a recession, David Cote, the ex-CEO of Honeywell, says it’s about balancing short- and long-term goals.

Cote has already been through a recession. He took an innovative approach to managing Honeywell through the 2008 recession including encouraging employees to take unpaid leave instead of permanently laying them off. This allowed the company to prepare for the eventual recovery that follows recessions without having to rebuild their workforce capacity.

Other actions Cote took include cutting costs early and restructuring parts of the business sooner that were planned to be revised anyway.

His idea to implement these changes came from looking outside of his own industry for insights and educating himself on the various factors that contribute to both brief and extended economic downfalls.

Former CEO of Honeywell on How to Survive a Recession

As unpleasant as recessions are, you can use them to set the stage for future gains against your competition as long as you stay disciplined and maintain a balanced, short-and long-term approach.

Second, even as you are cutting costs during the recession, anticipate what you can do to prepare for the recovery, which does come despite how gloomy conditions might currently look.

Managing short-term costs with the future in mind requires more effort on your part, and it requires independent thinking. Be quicker than most to prepare for recessions even when bad economic news hasn’t yet hit completely. And in the depths of recession, stay calm while everyone else is panicking, remembering that good times will return and that your organization needs to be ready.

You’ll face passionate resistance from your staff, employees, and investors, but if you can hold your ground and stubbornly continue to manage for both the short and long term, these stakeholders will eventually thank you for it. One day, perhaps, you’ll find yourself writing a postmortem of your own.

Recessions don’t materialize out of nowhere. The signs and signals are out there, if you’re alert to them. To put yourself in a position where you can pursue short-and long-term goals even amid a downturn, you need to try spotting the early signs and take protective measures that others neglect. That’s what we did in 2008. The Great Recession officially began in December 2007, triggered by a crisis in subprime mortgage lending that broke out earlier that year. Bankers maintained the subprime problem was limited, and initially it didn’t seem to be a big deal because Honeywell’s sales, margins, earnings-per-share, cash flow, and orders were all strong. Our mergers and acquisitions machine was working, and we had many new products and services, process initiatives, and geographic expansions in the pipeline.

In the back of my mind, I did harbor some doubts. The Asian financial crisis of the late 1990s had begun with the collapse in value of the Thai currency. Observers had proclaimed then as well that it was no big deal. But the crisis spread to Brazil, and then to Russia. Before you knew it, we had a global crisis on our hands. Would a similar situation come to pass here?

A dinner I had with an investor friend in late 2007 also gave me pause. When I playfully suggested that this person buy Honeywell shares, which were at $65 at the time, he said he would—when they had dropped to $59. “They’re not going to drop,” I said, but he insisted they would, predicting that a recession was coming. I was so sure that I bet him a future dinner that our share price wouldn’t drop to $59 within the next year. Nevertheless, I had a lot of respect for this person, and took a potential recession more seriously after our conversation—especially a few months later, when our stock dropped below $59 (it would eventually fall to about $27 at the recession’s low point).

My concern deepened during the first half of 2008. Although our financial performance remained strong, too many people were making dire economic predictions. It would have been easy at this point for us to simply bide our time and not take preventative measures. Investors weren’t demanding it, and many leaders in our company looked at our numbers and thought we’d remain insulated from recession. I wound up taking action, in part because of insights I’d gleaned from reading former treasury secretary Bob Rubin’s book In an Uncertain World. Rubin had argued that many outcomes are possible in a given situation, and you have to anticipate and prepare for eventualities that seem unlikely but that could prove extremely damaging should they materialize. If I had to bet $100, I would have put it on the side of the optimists. But we still needed to prepare for the unlikely (in my mind) scenario that the recession would hit Honeywell hard. As Paul Samuelson famously remarked, the market has predicted nine of the last five recessions, so you don’t want to overdo it. That being said, it makes a lot of sense to stay on your economic toes.

As a preventative measure, we sold our Consumable Solutions business   in July 2008 to B/E Aerospace for $1.05 billion. The price was close to the market peak and allowed us to book a $623 million pre-tax gain. Rather than return that money to shareholders, we put about $200 million of it into restructuring (consolidating plants, laying off about three thousand employees, and so on) to prepare for tougher economic times, should they materialize. We had been planning to perform much of this restructuring over time anyway for reasons unrelated to the recession, but now was a good time to do it (it wound up saving us almost $50 million in 2009). During our budgeting process for the 2009 fiscal year, I also asked our leaders to base their plans on the assumption that we would see significant sales declines.

3. Take control of the downturns.

Many people in the business didn’t believe my theory that sales would slow down. It elicited blowback from leaders in our Aerospace division, who claimed their order volume was strong both for short-and long-cycle parts of their business. If sales did start to dry up, they had $120 million of cost reductions they could make. I told them to make those cost reductions now, just in case business got worse.

Good thing, because in October 2008, nearly a full year after the recession’s official start, the bottom fell out of our short-cycle businesses. In the fourth quarter of 2008, our sales fell by 8.4 percent, with some areas of our business seeing a 16 percent drop.2 But because we’d restructured and made conservative assumptions to begin with, our earnings actually increased year over year—from 91 to 97 cents a share. We’d been able to take approximately $600 million in costs out of our business—about 60 cents per share.

In addition to these positive short-term results, we set ourselves up for better short-and long-term performance down the road. And because we had already begun to pare back our costs, additional cuts we had to make as the recession deepened weren’t as drastic as they might have been. We were also better able to continue to fund growth initiatives, and better able to deliver on our promises to customers (more on that in a moment).

Unfortunately for our investors, this advance preparation didn’t help our stock price much once the recession hit us. Our shares dropped precipitously, reaching $27 in November 2008 due to fears about our market as well as our reputation as a company that performed poorly during recessions. Our share price wouldn’t hit $60 again until the spring of 2011. Once the recession was behind us, however, investors did give us plenty of credit for reacting to the bad economic times long before our competitors did, and for outperforming both during and after the recession. We weren’t visionaries, but rather had simply cultivated a foundation of intellectual discipline. I was reading widely, exposing myself to people and ideas far beyond our industry, and that helped me look beyond our own quarterly numbers to see the broader economic picture and to take reasonable precautions. Not that our preparations for the recession were perfect. In 2007, after years of pressure from investors for a share buyback, I spent $2 billion to buy our shares back at a price of $55. Although some might argue that returning cash to shareholders wasn’t a bad move (especially considering that as of this writing our stock sells at $172), in the depth of the recession that $2 billion in cash would have come in handy.

On the whole, though, we had shown caution even when our business still looked strong, and this helped us. I like to think of our efforts cultivating intellectual rigor as an important, albeit intangible long-term investment. It’s tough carving out the time to read and think amid the pressures of the day, but that investment does eventually pay off in the form of better decisions. For us, the payoff came when we needed it most: just before and during the Great Recession.

If you’re unsure how to survive a recession, the first step might be to cut costs where you can and leverage parts of your business that are doing well. The last recession lasted approximately 2 years, so you have time to make decisions that will protect your short- and long-term goals. Fight the panic that might lead you to make short-term decisions that impact long-term success. And remember that you may not always get it right. Even leaders of Fortune 500 companies like David Cote acknowledge that mistakes will happen. Planning now will prepare you later. Do you have a recession plan in place? What steps would you take to avoid letting a recession control your business? 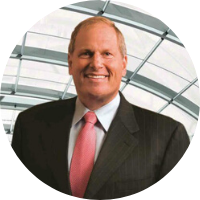 David Cote is Executive Chairman of Vertiv Holdings Co, a global data center products and services provider. He was formally the CEO of industrial conglomerate Honeywell, which was a “chronically underperforming” company plagued with environmental and liability issues, an underfunded pension, and unhealthy, aggressive accounting and business practices. Today, Honeywell is ranked one of the world’s most reputable companies for corporate responsibility by Forbes.