5 Strategies from a Psychiatrist for Dealing with Difficult People 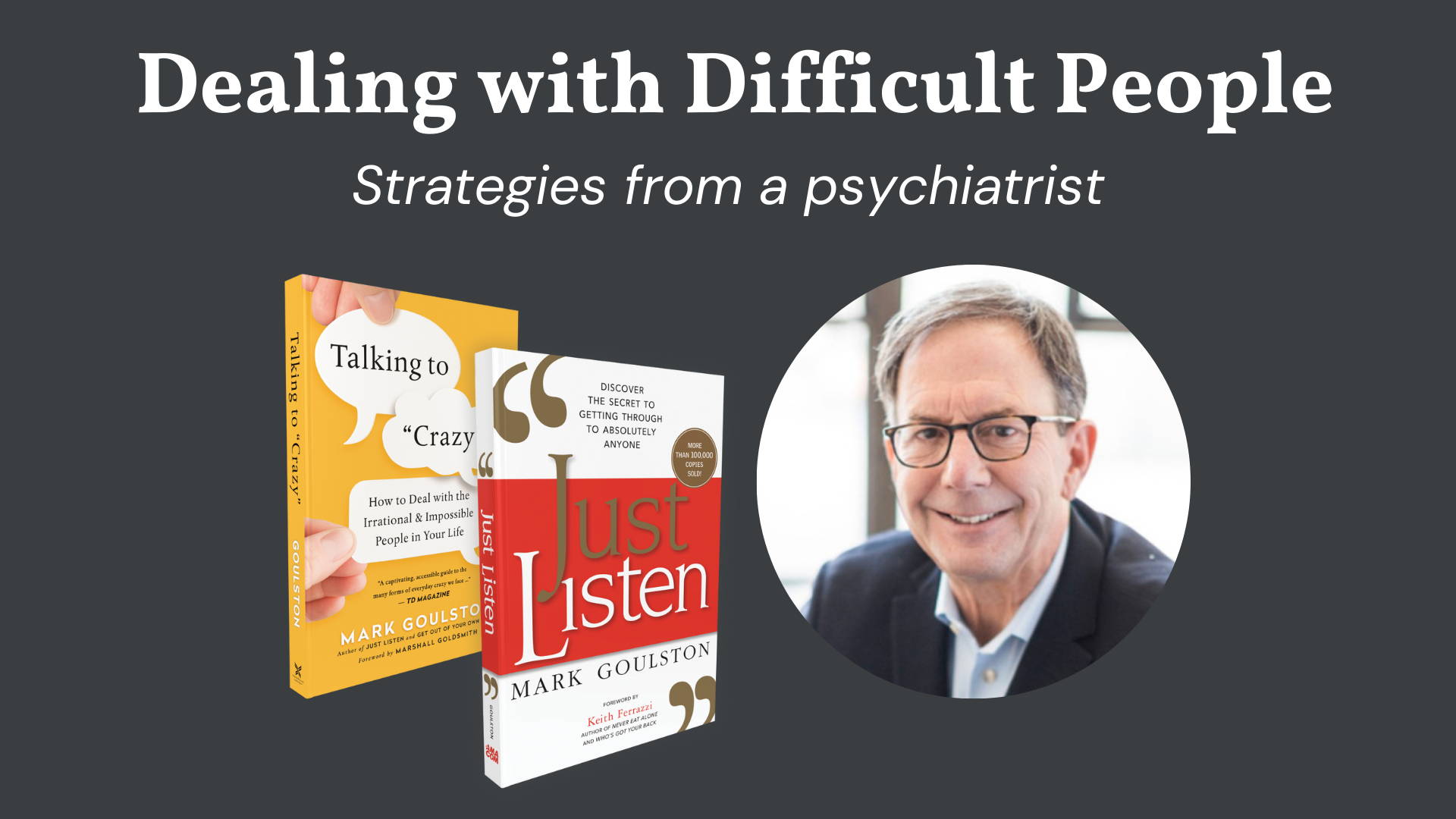 “Fine.” If you’ve ever used that word to end a conversation, then you have enough experience dealing with difficult people to know it isn’t enjoyable.

It’s no secret that one of the most cited reasons for disliking a job is the people we work with. But instead of leaving one job just to encounter the same type of people at the next one, your efforts could be better spent learning how to get through to anybody.

It doesn’t matter whether you’re trying to persuade someone at work or diffuse a volatile exchange between coworkers, your success will be determined by your ability to communicate.

Top-ranked psychiatrist and communication expert Mark Goulston shares dozens of strategies he has developed from decades working with clients including CEOs, presidents, founders, entrepreneurs, and employees in his books, Talking to Crazy and Just Listen.

Experiment with a few of his most popular strategies and let us know how they worked for you!

Outcome: Moves a person from listening to considering—and from “Yes . . . but” to “Yes!”

If you’re trying to get other people to realize that your plan or goal is possible, The Impossibility Question is the perfect tactic to use. It’s getting your coworkers, your clients, your employees, your boss, your investors, or your family to go from “we can’t do it” to “maybe we can do it” to “let’s do it.”

The Impossibility Question works with a person who’s somewhere between resisting and listening, but not ready to move to considering.

These two questions move a person from a defensive, closed position or a selfish, excuse-making stance into an open, thinking attitude. And they make the person picture your vision as a reality and cooperate in thinking strategically about reaching that reality

Outcome: Transition a person from resisting to “willing to do” in a single step, by changing the dynamics of a relationship

Anger and empathy—like matter and antimatter—can’t exist in the same place at the same time. Let one in, and you have to let the other one go. So when you shift a blamer into empathy, you stop the person’s angry ranting dead in its tracks.

The Empathy Jolt is a powerful intervention to use when two people in your life are beating on each other brutally instead of communicating—or when at least one person is more interested in attacking than in listening. Use it at the first sign that a conflict is getting out of control.

If two people are struggling to work together, you could intervene in the conversation like this…

Do this right and you’ll all have fewer problems to solve, because people who experience an Empathy Jolt will have less desire in the future to rip each other apart and more desire to make things go right for each other. That’s because they’ve actually “been” each other, for at least a moment, and now they know what it feels like.

Outcome: Recover a relationship that is falling apart

A-E-U stands for Apologize, Empathize, Uncover. It’s an edgy (and slightly scary) way to cut crazy down to size.

The first step is to apologize. That’s because the best thing you can do when a relationship is falling apart is to say, “I’m sorry.” Nearly any other approach will make the other person

want to fight back or escape. But offering an unsolicited apology—something people almost never do—changes the dynamic instantly.

Next, is the empathy step. Say something like, “I tried putting myself in your shoes, and I realized what is important to you. And right now, you don’t feel it or aren’t getting it. I never knew it was so bad. And for that, I’m also sorry.”

At this point, the person you’re speaking with might not react—but they’d be taking it all in.

The final step is to uncover. This is where you bring out into the open the darkest thoughts your conversational partner may have about you—thoughts they might be terribly ashamed of. If you could let them off the hook for these, you might really break through to them.

Outcome: Get an irrational person to stop dwelling on the past and focus instead on the future

Don’t keep going round and round in the same tired conversation with an irrational person. Instead, visualize tomorrow or next year, or picture your lives a decade from now. And then help the person see into that future with you.

Time Travel is a powerful way to create a plan for dealing with issues as they arise or even before they arise. For example, try it on those Monday-morning quarterbacks who insist on beating up on you after you make a decision that doesn’t work out, even though their comments do no good and instead trigger guilt and resentment in you.

“Going forward, after I make a decision, unless I ask for your input, I don’t want you to tell me what I should have done differently. If you keep doing this, I’m going to stop telling you about decisions I’ve made. That’s not because I want to be evasive. It’s because I don’t want you to chime in after the fact. However, I will sometimes ask for your input before I make decisions.”

Outcome: Move a person from “doing” to “glad they did” and “continuing to do” by using the Power Thank You, or from resistance to listening with the Power Apology

There’s nothing wrong with simply saying “thanks” when someone helps you out. In fact, that’s usually the right thing to do. But if you stop there, your communication is merely transactional. It doesn’t touch the other person or strengthen the relationship between you.

Try the Power Thank You to generate strong feelings of gratitude, respect, and affinity in the other person.

Part 1: Thank the person for something specific that he or she did for you. (It can also be something the person refrained from doing that would have hurt you.)

Part 3: Tell the person the difference that his or her act personally made to you.

The Power Thank You doesn’t just make the other person look good. It also makes you look good to everyone involved by showing that you have empathy and humility and that you care. It also shows that you can be trusted to give credit where it’s due—something that can win you important allies in a corporate world where people too often get burned by disloyalty.

Need a different strategy for dealing with difficult people?

We have the PERFECT book bundle for you! Get an exclusive deal on both of Mark Goulston’s top-selling books on communication, Just Listen and Talking to Crazy. Learn more about our 2-in-1 bundle below.

Want to read more? Get the books! 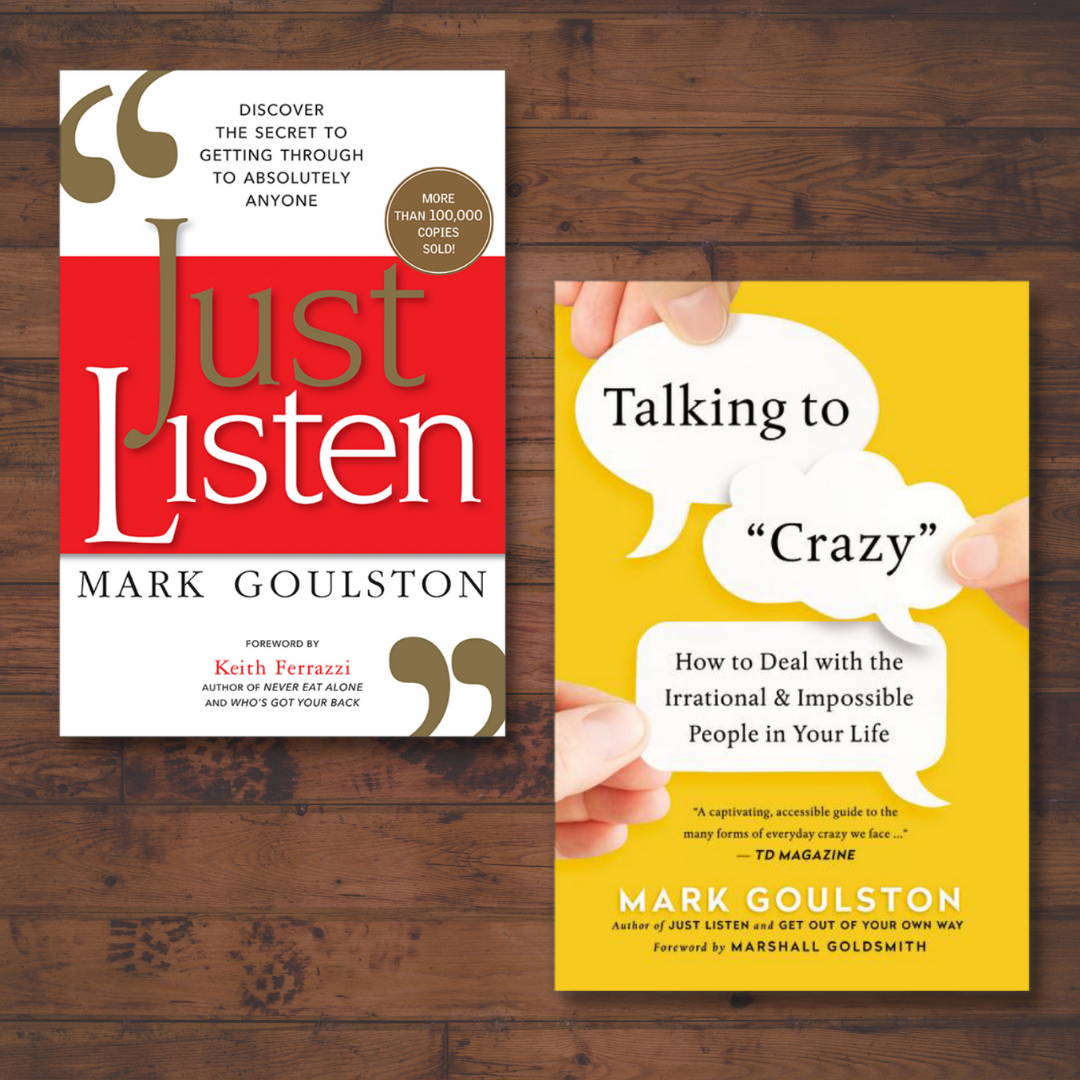 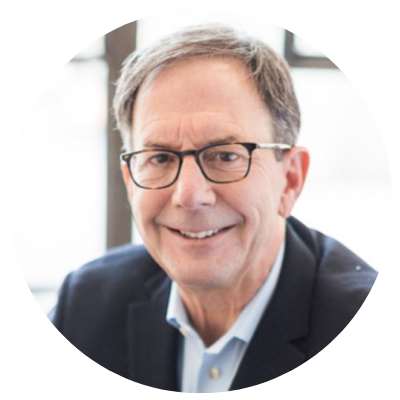