How to Make Smart Business Decisions

David Cote is known for his superior leadership of Honeywell during a turbulent time in company history. The Winning Now, Winning Later e-Course host shares the decision-making guidelines that helped him get the business back on track and allowed it to thrive in both good and bad economies.

What tough decisions have you had to make?

In the past year, business owners and CEOs have been forced to make some difficult decisions. From laying off employees and pivoting business models to restructuring teams and developing new hiring processes, these decisions have been large in impact and complex in execution.

Recently, The Predictive Index interviewed 160 CEOs to discover their concerns and priorities after some of the most difficult months in business. While a 2019 Gartner survey found CEOs were more concerned about growth heading into 2020, the post-COVID CEO has very different decisions to make including:

Decision-making can easily take up a huge part of a CEO or small business owner’s day. And if you aren’t confident in the decisions you’re making for your business, it can take even longer, wasting precious resources like time, money, stakeholders’ patience, and market position.

90% of CEOs changed gears strategically in response to COVID-19

Been there, done that

Former Honeywell CEO David Cote says the best business owners and CEOs are able to make decisions in the short-term that fortify their companies when recessions come around. In Cote’s experience managing Honeywell for nearly two decades, recessions are part of the business cycle whether they are the result of a global pandemic or a national security emergency or something else entirely.

Now, he cautions business leaders against making decisions without having the right information, support, and time so they can come to the best possible conclusion for the business in both the short-term and long-term.

Quick background: Cote took over Honeywell at a particularly rough point in the company’s history.

In early 2002, he became CEO for the industrial conglomerate, worth $22 billion at his induction.

“The company was underperforming, having struggled in recent years thanks to a botched merger with AlliedSignal in 1999, a couple of CEO transitions, and failed attempts to sell the company to United Technologies Corporation and then to General Electric,” Cote wrote in his book, Winning Now, Winning Later.

Through intensive probing into the company and its operations, Cote discovered a host of problems, which he boiled down to one primary problem: “the company didn’t have good fundamentals,” he wrote.

By the end of Cote’s tenure, Honeywell had grown to a market cap of $120 billion.

Below, Cote explains the fundamentals of effective business decision-making including his maxim of "banishing intellectual laziness," and reveals his tips for gaining confidence in the path you choose for your company or department.

As part of our intellectual discipline around execution, I insisted leaders apply a new scrutiny to metrics and knowing your numbers. When I arrived at Honeywell, every one of our plants had quality and delivery metrics that looked great. When we probed a bit, we learned every plant excluded harmful data that leaders didn’t feel represented their performance very well.

At one time I discovered that many team members at Honeywell were gaming the system to try to make their numbers each quarter (during the previous decade, for every dollar in earnings, we only generated 69 cents in cash, a fact that reflected aggressive bookkeeping). As a result, our leaders lacked a clear and honest picture of their businesses.

Accounting is your primary information system for making decisions, so if that information is bad, your decisions will be bad too. Our leaders were going through the motions, only pretending to run their businesses strategically or even competently. It was all a big mess—short-termism ran horribly amuck.

David Cote on knowing your numbers

This is a video excerpt of David's Winning Now, Winning Later e-Course.

Have a standard meeting format

You have standard operating procedures for almost every aspect of your business, but most don’t have a clear format for meetings.

I suggest a 6 step process for hosting an effective meeting which includes the following:

1. Make a decision that the meeting is necessary.
2. Allocate sufficient, but not excessive time.
3. Show up on time.
4. People need to come prepared with short, to the point presentations.
5. Run the meeting effectively as a leader.
6. End every meeting with 3 critical questions: Who? What? When?

This is a video excerpt of David's Winning Now, Winning Later e-Course.

Set aside time to think

While reading a book about the construction of the Panama Canal, I came across an anecdote about the project’s chief engineer, whose math teacher used to say, “If you have five minutes to solve a problem, use the first three to figure out how you’re going to do it.”

I repeated this story within Honeywell in an effort to get people to slow down and think about problems a bit more. On one occasion leaders of our Aerospace business unit were considering whether to proceed with a possible acquisition.

At the end of the meeting I asked the team if they really wanted to go ahead with the deal and if they could guarantee the results. Most of the team said yes right away, but the head of Aerospace at the time, Tim Mahoney, said, “I’d like to take my three minutes. Can I get back to you Monday?”

I loved that response and readily agreed.

Tim pored through the details of the deal yet again, taking the time to identify additional opportunities, and decided to proceed. We spent $600 million acquiring that company. About five months after the deal closed, Tim’s team landed a $2.4 billion order we hadn’t included when valuing the company.

Tip: When you’re an in-demand leader, your calendar can feel like it no longer belongs to you.

It’s a crucial skill to be disciplined and give yourself time to think. Here are some ways I encourage to schedule time to think:

- Minimum Effort: Add X DAYS to your calendar (at least one/quarter). These are days that you block off between 4 to 8 hours just to sit and think

- Maximum Effort: Take time to holistically look at your calendar and plan the year. From vacation days to offsites, employee reviews to time to look at your numbers. Block off time in your calendar to ensure you’re making space for activities that matter to you.

"Effective business leaders give themselves time to think."

Get trained by David Cote!

These tips just scratch the surface of Cote’s wisdom. These tips and more are explained further by Cote in his e-Course: Winning Now, Winning Later. As you continue making the tough decisions that guide your business or team on the path to recovery, this e-Course is designed to provide structure for your decision-making. 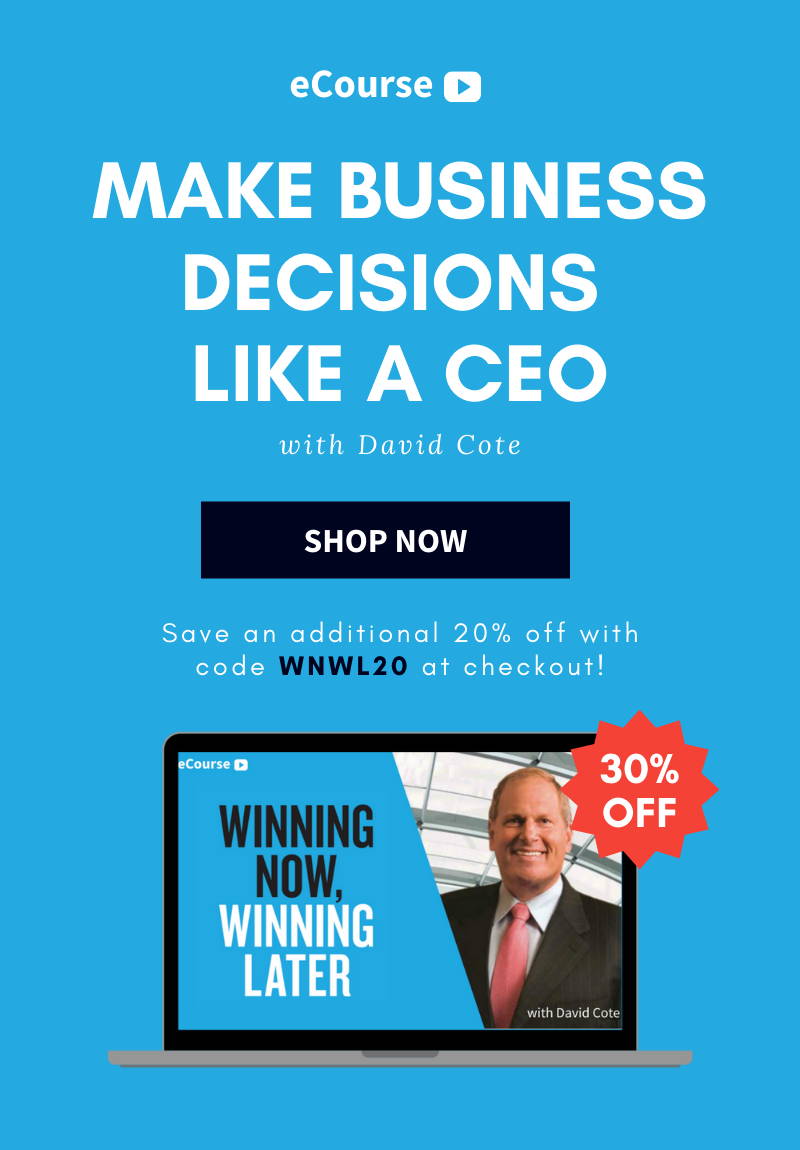 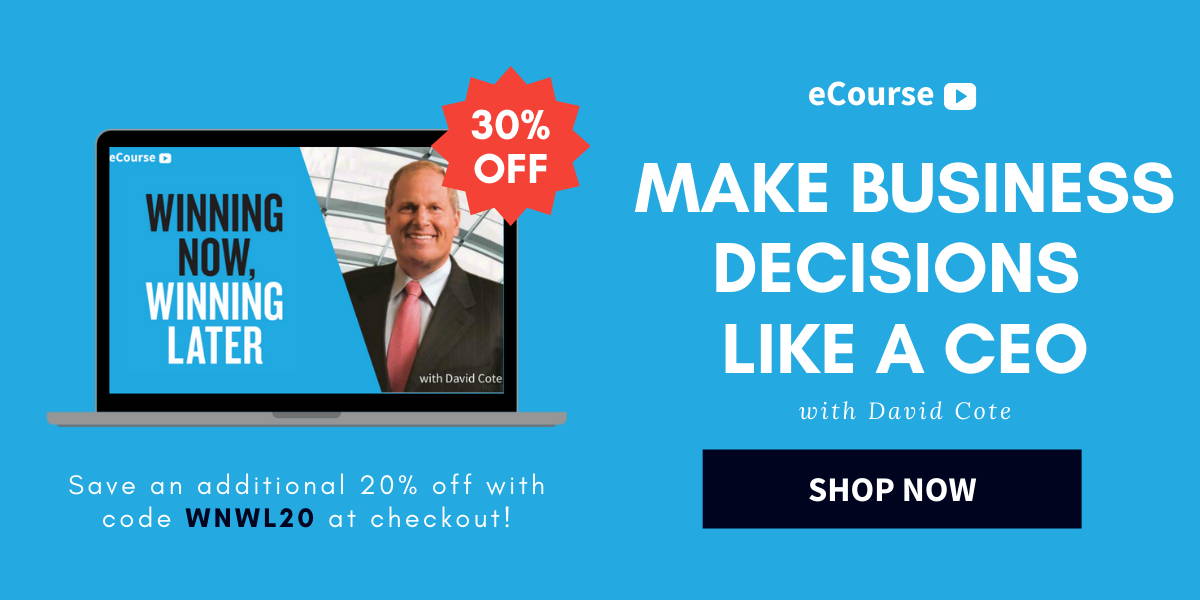