2 Ways to Manage Uncertainty During the Unexpected

Marc Morial served two terms as the mayor of New Orleans where he was responsible for bringing voices from different parts of the city together to make social, political, and economical progress.

One of the most important leadership skills to have in your repertoire is knowing how to navigate those unexpected twists and turns.

And we’ve all had them.

The most unexpected twist of my mayoral history occurred on the morning of October 11, 1998.

My friend and New Orleans gospel legend, Raymond Myles, was found with a bullet through his heart at the corner of Chartres Street and Elysian Fields Avenue.

Myles’s death ignited a fire in me that in turn set off a firestorm I never saw coming.

At the time of Myles’s death, I was part of a US Conference of Mayors’ Task Force.

We were in negotiations with the NRA and the Gun Manufacturers Association of America (GMAA) to find a scenario that would allow American cities to enact policies that would drastically reduce the number of guns that find their way to our streets while honoring Second Amendment protections and the gun companies’ rights to make a profit.

Although some of my fellow mayors took the NRA and GMAA representatives at their word, I never thought they were negotiating in good faith. Unfortunately, I was correct.

The task force was still in the midst of those “road-to-nowhere” negotiations when my friend Raymond Myles was stricken down by a gun’s bullet.

Just a few weeks before, Myles performed at the inauguration festivities marking my second term. Now he was another gun violence statistic.

The contingent of mayors stressed staying the course, but frankly, I had had enough. I broke ranks, stepped out on my own, and sued the NRA and GMAA.

Twenty days after Myles’s body was found, I stood in my office on Halloween Day 1998, wearing a jack-o’-lantern tie and holding a press conference to announce the lawsuit. Soon after, 35 cities including Chicago sued the NRA and their primary financial backers in what was now a national campaign to halt the Wild West–style proliferation of guns.

The NRA fought back with a misinformation campaign and threats to boycott New Orlean’s hospitality industry by moving a previously scheduled national convention out of the city if we didn’t drop the lawsuit. They even enlisted actor Charles Heston (yep, the guy who played Moses and took on the Planet of the Apes by himself) to attack me, my integrity, the lawsuit, and my city.

When I filed that lawsuit, I knew the NRA would make some noise, but I did not foresee national-level blowback. As a result, I had to make up a plan on the fly.

From this on-the-fly plan, we were able to gain our footing and fight the NRA team in court. They were slick, however, and worked by supporting elected officials to create a law undermining and disabling our lawsuit.

The case went all the way to the Louisiana Supreme Court. And though we lost, I did not regret the fight.

What I did regret was not being fully ready for the big payback.

Surprises are a natural part of life, business, and leadership. That doesn’t mean you can prepare for all possibilities, but it does mean there are steps you can take to minimize the negative impact of surprises.

Scenario playing is the essence of collaborative thinking. Figuring out how things play out before making a decision is not something that can be done in your head alone. You need diverse thought and ideas that come with engaging the energies of others, when everyone in the room is asking and answering the questions “If we do X, what move are they going to make? And if that’s their response, how do we respond?”

If I could fight the NRA again, I would have my playbook of scenarios at the ready with moves and countermoves already outlined and primed to go into motion. I would be ready to execute my plan to the full.

In business, no matter how good you think your product is, competitors are out there trying to take you down, devising schemes and surprises to throw you and your product off your game.

Reflection is critical for a leader. Reflection generally takes place during those post-event review sessions. But the person striving to be a transformational leader reflects regularly. Reflecting on the NRA experience revealed that in that instance I didn’t follow my own guide, my own advice, or my own success formula.

For example, when I decided to sue the NRA, I didn’t engage in scenario-playing, a planning device I had used hundreds if not thousands of times before and since.

One of the most powerful constants in all of life, business or otherwise, is the fact that surprises are the most predictable part of life, especially for leaders.

The ability to deal with surprises, then, is often the dividing line separating the good and average leaders from those who are exceptional, those who become transformational. 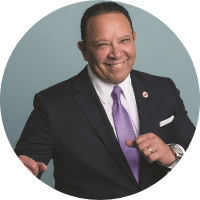 Marc Morial, former mayor of New Orleans and current president and CEO of the National Urban League, oversaw many improvements during his terms, including crime reduction, police reform, and the passing of a significant bond issue.

In May 2003,  Morial  was appointed president and CEO of the National Urban League. Since that appointment,  Morial’s  Empowerment Agenda has worked to reenergize the League’s diverse constituencies; to build on the strength of its nearly one-hundred-year-old legacy; and to increase its profile both locally and nationally.