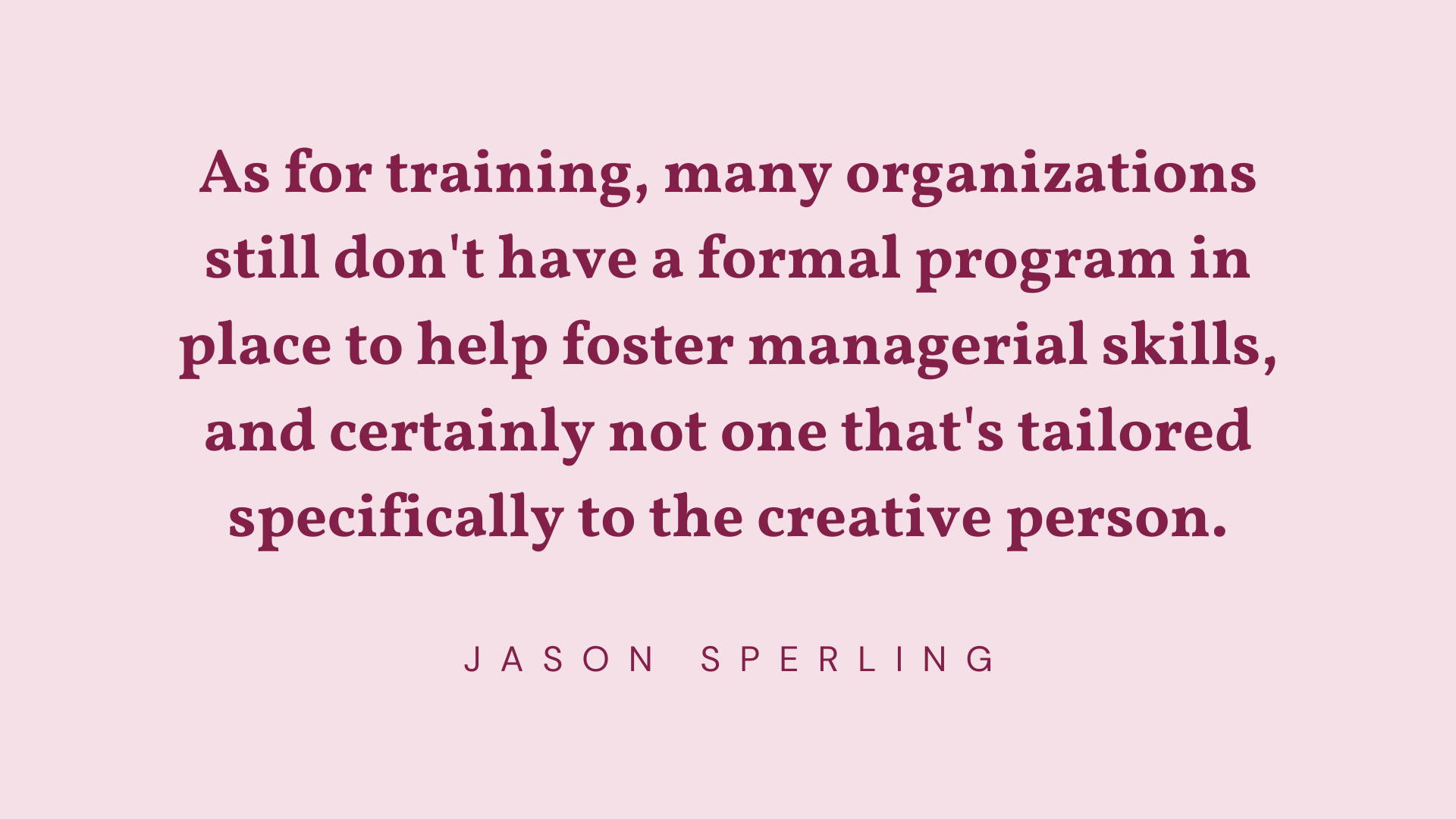 The latest research shows that 7 out of every 10 supervisors aren't trained in the skills required to manage the average workforce.

But in the Age of Creatives, management training is more necessary than ever.

Creative fields are booming. There have been 9 years of consecutive growth in creative jobs according to the National Assembly of State Art Agencies, while 50% of all job opportunities list creativity among the skills needed to land roles in today's leading companies.

For managers who receive the call to lead these growing creative teams, there is no guide. Whether a newly-minted manager needs advice for jumping from creator to manager or wants to understand creative employees better, Jason Sperling wrote Creative Directions to fill this crucial management training gap.

Sperling is self-proclaimed "creative person" but he also has impressive credentials including his current gig as Global Executive Creative Director for Facebook Reality Labs. He has been forced to grow out of a creative role into a supervisory one—and he's mastered the art of managing creative people well.

"Put simply: the reward for being good at our job is to do a largely different job that we don’t have the natural skill set or qualifications for, and might not be good at."

The jump to a managerial role poses a whole new set of challenges for you. Here are 5 management training tips from Sperling to help creative leaders manage creative teams: 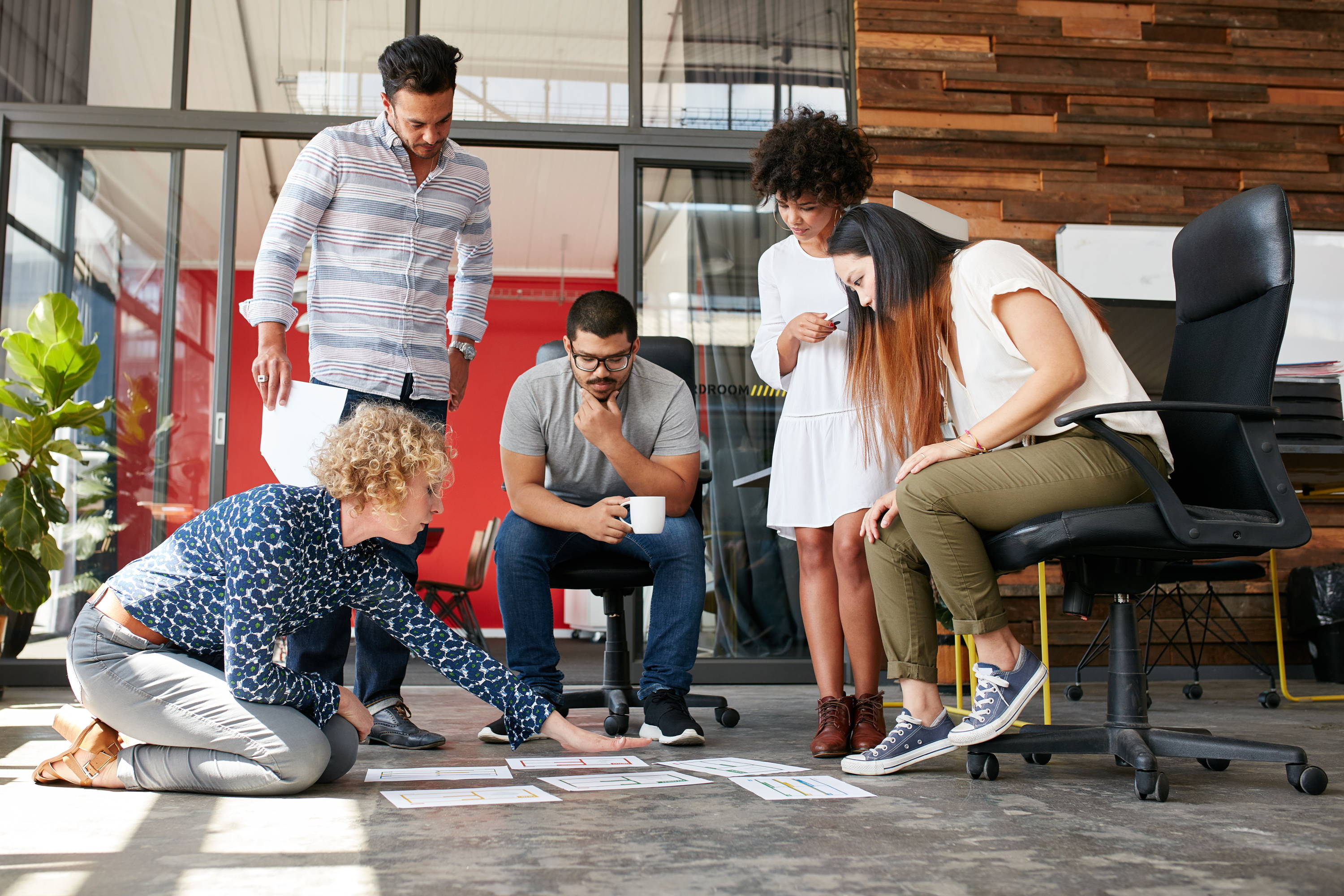 “As a creative person, the goal was as simple as they come: make yourself the focus of attention. Once your work is noticed, you (the work’s obviously talented and irreplaceable maker) will be noticed, too.

However, when you become a leader, all that needs to change. As the leader of a team, it’s important to recognize that it’s not just about you anymore.

There are people depending on you to help them figure out how to arrive at great ideas, improve their craft, and build a body of work that will earn them a share of the spotlight. They want to feel supported by you and heard, to receive mentorship opportunities, and know that their individual well-being is being taken into consideration.

If you don’t shed your “maker skin,” you can erode loyalty and trust within the groups you manage, stifle growth within your company, and lead to job dissatisfaction and—worst of all—a loss of creative talent.”

“Simply put: have people’s backs. You’re in the somewhat enviable position of being at the forefront of your group. Your title alone makes you someone that people listen to, and instantly adds street cred to what you have to say. You get to represent your group and, when the need arises, lobby for the work and the people who are making it.

Be the loud, supportive voice the people on your team look for, whether you’re building support for an idea or being an impenetrable human shield for their work.

There’s no end to the loyalty if people know you have their backs, and that you’re supportive of the work they do. Loyalty means people will stick around and give you their best, even when the work or salary isn’t optimal. At the end of the day, the greatest leaders tend to have grateful teams.”

“Creative people put a ton of heart, energy, and hope into their creations. Their work is often in a fragile place when it’s first born into the world, and their makers have a strong attachment to them—hence why ideas are often referred to as “babies.”

The feedback you give and how you give it is vitally important to the outcome of assignments and, longer term, the satisfaction of employees. True, rejection and criticism are part of the game, but leaders need to master the art of saying something sucks.

Keep your feedback honest, thoughtful, and constructive. Be specific about what works and what doesn’t, and avoid the “I’ll know it when I see it” approach. If possible, balance the criticism with praise and consider the impact it might have on that person’s self-confidence moving forward.

It helps to map back to your overarching strategy and goals as you determine what’s not working and develop a path forward. Stay positive and enthusiastic, and whenever possible praise people for what they’ve done right rather than focusing on where they failed. Lastly, make sure your feedback is constant and consistent. There’s nothing more frustrating than trying to hit a moving target.”

“If you have an ambitious, take-charge creative person in your group, adapt to their methods rather than trying to slow them down to conform to yours. There’s a good chance a hungry “super maker” will do amazing things when given the opportunity, so it will pay off to nourish their enthusiasm and intensity. Give them the space, support, and means to bring their wild ideas to life, and remove any barriers that stand in their way. Oh, and make sure to shield them from bureaucracy, too—bureaucracy doesn’t take too kindly to these folks.

While you give your overachiever room to create, protect the people in your group who aren’t as aggressive or self-motivated from feeling threatened or getting trampled. You don’t want to lose people because a super maker pushes too hard and leaves a wake of hurt feelings behind. Ultimately, the integrity of your company culture is important. Make sure you have the interests of everyone in your group at heart by respecting their differences in work styles. Just because one person wants to work weekends, burn the midnight oil, and sleep underneath their desk doesn’t mean everyone has to.

Lastly, be sure that while you allow a super maker the freedom to push the envelope, you instill in them the importance of respect, maturity, and a sense of perspective. Let them know they need to play nice with their peers, and that it’s not the end of the world if their work doesn’t get picked or requires revisions. Ambition plus asshole is a toxic combination. At the end of the day, talented people need to be considerate and kind, too.”

“Greatness is tough to achieve when you play it safe. Brilliant ideas, especially the kind that seem impossible at face value, require brave thinking. However, the more ambitious the idea, the greater the risk, and thus the greater the chance of failure. And if failure isn’t sanctioned, that could mean a lower raise, potentially being bypassed for a promotion, or losing your job. If you want people to come up with those “what-if, who-knows, never-been-done-before, holy-crap ideas'' you have to be okay with them not working out as planned. If you want your team to do something unique and break through, you have to be okay with clients or intended audiences potentially balking.

Don’t assume that people will be fearless on their own. While many talented creative people would argue that risk is necessary, no one is going to do a high dive into a tiny bucket of water if they don’t have to. It’s justifiable that someone who greatly values their position, who is familiar with the type of mediocre work their client typically buys, or knows what their creative leader will probably like is going to do safer, more familiar work that doesn’t put them in potential peril and keeps the paychecks coming in. Ambition and bravery need to be sanctioned and communicated by leaders like you.” 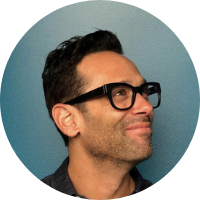 Jason Sperling serves as Global Executive Creative Director for Facebook Reality Labs. For over two decades, he has been developing iconic, award-winning advertising for clients that include Apple, Honda, Pixar, TikTok, Amazon, and UNICEF. His Apple “Get a Mac” campaign was declared Campaign of the Decade by Adweek and was one of Ad Age’s Top Campaigns of the century.