4 Reasons to Believe People Can Change 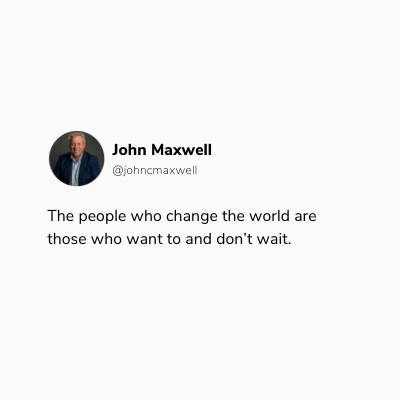 Belief in yourself is a powerful thing. Psychologist Ellen J. Langer wrote about a study she conducted that showed the impact of belief.

We explored the mindset most of us have regarding the excellent vision air force pilots have. All participants were given a vision test. One group of participants was then encouraged to role-play “air force pilots.” They dressed the part and, in uniform, sat in a flight simulator. They were asked to read the letters on the wing of a nearby plane, which were actually part of an eye chart. Those participants who adopted the “pilot” mindset, primed to have excellent vision, showed improved vision over those who were . . . simply asked to read an eye chart from the same distance.

We want you to adopt a change-my-world mindset.

You have much greater control over your ability to accomplish difficult things than you might believe, but you must have hope and believe in yourself.

Do you know what convinces me that you should believe in yourself, have hope for yourself, and be certain you can change for the better? Because I’ve personally experienced changing for the better. I’m known as a leadership expert, but the most difficult person I’ve ever had to lead is myself. Thankfully, I’ve grown. I’ve gotten better in my ability to do what I should do, when I should do it, with the right motives for doing it.

What Motivates People to Change?

People can change. Over the years I’ve discovered that people change when one or more things happen:

The most basic impetus for change is pain. From the time we are first able to make choices as a child, we instinctively avoid pain. But a better response to pain is to change so we are no longer hurt by it. Our hope is this book will give you a positive pathway forward and provide hope if you’re hurting.

Early in my career I was inspired when I saw that developing people as leaders has such a positive impact. The discovery that everything rises and falls on leadership changed the way I thought, worked, and interacted with others.

Perhaps you’ve been affected by something that has inspired you. If so, that’s fantastic. If not, as you read this book, you will become acquainted with the stories of people who saw a better life or more excellent future for those around them and who took action to catalyze change. Please allow their example to move you and open your eyes to the need that maybe only you can address.

When you believe there’s nothing you can do about a problem, it’s disheartening and demotivating. But when you begin to learn how you can take steps to start making a difference, it will propel you to take action.

Rob and I believe you already have the desire and ability to be an agent for change. Maybe you’re already making a difference and want to expand your impact. Whether that’s true or you have yet to get started, this book will give you a simple, straightforward game plan to take the steps needed to incite positive change.

The world is not looking for more dreamers. It is looking for dream makers. Brad Montague, the creator of the Kid President videos and television show, stated it clearly:

Dare to Dream, but please also Do.

For Dreamers are many, but Doers are few.

As you read through this book and put what you learn into practice by taking action, you will start to see changes in yourself and the people whose lives you touch, and you will help others to make their dreams come true.

That’s what Bryan Jarrett has done—helped others’ dreams come true by giving them what they need to change.

Your Greatest Impact is Where Your Past, Pain, and Passion Overlap

Jarrett grew up in an unstable home situation in a small, rural farming community in the South. His father would often disappear for days or weeks at a time, until one day he never returned. Without the protection of his father’s presence, Jarrett became a victim of repeated sexual abuse from an extended family member. He started drinking in his teens to cope with the abuse and to numb the sense of abandonment he felt.

Eventually Jarrett became a person of faith and began to heal. He immediately wanted to help others, particularly the overlooked, the less fortunate, and the underdog. When he first started, almost thirty years ago, he did a lot of youth work. “As I began to heal, I began to feel the freedom to talk about it,” he said, speaking about the childhood sexual abuse he suffered. “I say this all the time: rodents and roaches play in the dark, and when the lights come on, they all go find a place to hide.

“There was freedom for me in being able to talk about it,” said Jarrett. “As I shared my story, I realized that thousands of kids across this country were connecting with my story, and then I started looking into the numbers of people who admit to being sexually abused.”

His heart stirred, and he decided he needed to do something about it. Jarrett and his wife established Lonesome Dove Ranch to help children who had suffered abuse begin to heal. Most of the kids they serve are in foster care.

Each week the ranch hosts fifty children who are served by 150 adults, nearly all of whom are volunteers. “The needs—emotionally, mentally, sometimes physically—are extreme.”

Volunteers at the ranch help the kids and serve them freely. Giving each child individual time and attention enables healing to begin within a week. The ranch’s success with children has made it possible for them to open additional camps, so they now have five different locations.

Jarrett took the hurt he felt, the vision he saw, and the lessons he learned and used them to have hope in himself to make a difference. Then he asked others to join him, and with what he received, he had the courage to bring Lonesome Dove Ranch into existence. He is changing his world one child at a time.

“When your past, your pain and your passion overlap,” said Jarrett, “you find the sweet spot of your purpose in life.”

You can find your sweet spot too. You can be the change you want to see in the world. It all starts with changing yourself.

The first step in that process is having hope that you can. 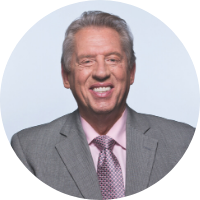