Prepare Your Team for Change with the Jack Welch Story

Through the inspirational power of a story, former CEO of General Electric, Jack Welch, singlehandedly transformed his company's future. 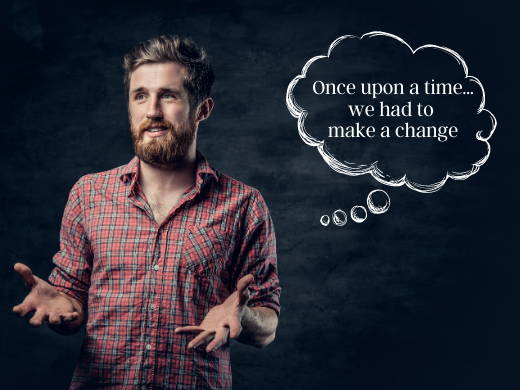 Ask any businessperson to name a superstar CEO, and Jack Welch’s name is likely to be one of the first mentioned. He became the chairman and CEO of General Electric in 1981 and held that position for two decades.

Those are two of the reasons why, in 1999, Fortune magazine named Jack Welch “Manager of the Century.” Getting his leaders to change by facing reality was one of the hallmarks of Welch’s early years as CEO. He did that by telling and retelling the story of his first successful reality check, described in his book Jack: Straight from the Gut.

In Jack’s first year as CEO, he was on a field visit to GE’s nuclear reactor business in San Jose, California. While there, the leadership presented a rosy plan that assumed orders for three new reactors a year. Looking backward, that was a reasonable assumption, since GE had been selling three or four reactors a year since the 1970s. But the year was now 1981, just two years after the Three Mile Island nuclear disaster in Pennsylvania. What little public support there was for nuclear energy had vanished. And GE hadn’t received a single new order in the two years since. Jack listened politely for a while and then dropped a bombshell.

“Guys, you’re not going to get three orders a year. In my opinion, you’ll never get another order for a nuclear reactor in the U.S,” Jack told them. He then tasked them with figuring out how to make a business out of selling nuclear fuel and services to the 72 active reactors they already built. They were shocked.

They argued that if they took those orders out of the plan, it would kill morale, and they’d never be able to mobilize the business again when the orders came back.

Jack didn’t buy it. It was time for a change in the workplace. GE restaffed the business to focus on a service model and grew earnings from $14 million to $116 million in just two years.

When Jack retired 20 years later, the company still hadn’t gotten a single new order for a nuclear reactor in the United States.

SERVING UP CHANGE WITH A STORY

The first obstacle to change in the workplace is getting people to accept that change is needed. Delivering a sobering “reality check” like Jack Welch did is one way to do that. This story teaches that as a leader, you need to do likewise in your organization. But it has another use as well. Telling this story prior to delivering your reality check is a good way to prime your audience to accept and appreciate being dealt with whatever eye-opening truth you’re about to deliver. Paul Smith is a dedicated father of two and an expert trainer in leadership and storytelling techniques. As the author of the popular Lead with a Story, he has seen his work featured in The Wall Street Journal, Time, Forbes, The Washington Post, Success, and Investor's Business Daily, among others.