The Dos and Don’ts of Delegating Tasks to Employees

Delegating tasks doesn’t have to feel daunting. Richard Luecke identifies basic principles on identifying tasks that can be delegated and why other jobs should remain on your plate. 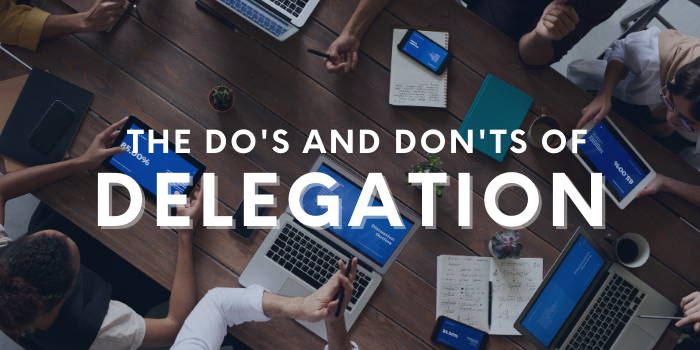 This one of the perennial decisions faced by all managers and many supervisors: In making the most of their limited time, they must periodically off-load certain work to others. But which tasks should they retain for themselves and which should be delegated? To find the answer, let’s look at all the things that weigh on your time and determine which can—and which cannot—be outsourced to others.

In principle, you should delegate as much as possible; doing so will develop the capabilities of your staff and give you more time for important and strategic work. You can delegate anything from simple tasks to decisions to entire projects or processes.

Generally, you should consider delegating tasks that your subordinates—considering their skills and available time—are capable of handling or can be trained to handle. These tasks will be determined by your situation. As you think about what you should delegate, be guided first by this question: What tasks are you now doing that do not require your unique knowledge, skills, or authority? The answer will identify opportunities for possible delegation. There’s still no assurance that the right people with the right skills and sufficient time will be available to take them on.

You and your subordinates very likely share some skills in common. These may be the ability to contact customers via telephone, by e-mail, or face-to-face; to generate monthly department progress reports; to schedule meetings; to keep track of when people plan to take their vacations; to check the accuracy of expense reports; to provide coaching to new employees; and so forth. The list of shared skills may be long, especially if you’ve worked your way up the ladder in the department. You had to learn all those things to get where you are now. And even though you’re the manager, it’s likely that some people have specialized skills you don’t have.

There is also a skill set that is uniquely yours, things that only you can do by virtue of your training, experience, or authority. Budgeting, planning, sales forecasting, customer/supplier negotiating, effective meeting management, and mentoring are just a few of the skills that we normally think of as uniquely managerial skills. True, a sharp protégé may have mastered some of these skills, but few subordinates of lower or middle managers will have them. Now that you understand the shared skill set in your work group, consider the many tasks you are personally handling that fall within that shared skill set. Remember, these are tasks you are doing that do not require your unique capabilities as a manager—things that other people could do. These may include developing monthly reports, setting up outside appointments, filing, or correspondence. To be systematic, make a list of these tasks. Now take a look at your list and ask yourself, “Which of these tasks could I reasonably delegate to someone else?” Put a check mark next to these.

Whenever possible, identify entire tasks, not bits and pieces of jobs. By making one person responsible for an entire task, not only do you give that person a greater sense of control and responsibility, but you also avoid the coordination problems and “hand-off errors” that typically plague jobs that are delegated among several people. If the task is too large for one person to take it on, consider delegating it to a team. Delegating to a team is different from delegating different parts of a task to different individuals. A team can organize the work assigned to it and hold itself accountable as a group for the work’s successful completion.

When you’re considering tasks to delegate, an easy way to begin is to list tasks that recur frequently or regularly. Recurring tasks, such as the following, show up at all levels of the organization and require different levels of skill:

Almost by definition, these tasks become routine, which means that once you’ve shown someone how to handle them, you won’t have to show them again. By contrast, a one-time chore may not be worth delegating, given the time you’ll have to invest in training someone to do it right. The time available for training and overseeing progress should always become part of your calculus in deciding what to delegate. True “one-time chores,” however, are rare in the business world.

WHERE TO DRAW THE LINE WHEN DELEGATING TASKS

A few essential managerial activities should stay with you and never be delegated to others. These include hiring, performance review, firing and disciplinary actions, and certain specific tasks that have been delegated to you by someone else.

It’s usually a good idea to seek your subordinates’ insights about job candidates. Many managers routinely ask their people to meet with visiting candidates to describe workplace routines and answer any questions the candidates may have. Afterward, they share with managers their impressions of the candidates. This collaboration benefits everyone. It is important that candidates understand the environment of the job for which they are applying, and it is equally important that current employees get a chance to interact with these individuals who may be joining their work group as peers. Southwest Airlines, the most successful company in its industry, uses a panel of employees from different levels and functions to interview and screen job applicants. The final decision, however, remains with the manager for whom an applicant will work. Subordinate input to the decision is fine, but hiring is not something that can or should be delegated. Along this same vein, you should retain the job of selecting people for project teams. Be open to advice, but make these selections yourself.

Many companies use annual performance review sessions to appraise employee performance, identify areas in which the person needs training or coaching, and communicate employee goals for the coming year. Is this one of your company’s routines? These reviews, based on face-to-face meetings between managers and their direct reports, are also used to make decisions about bonuses and promotions. Naturally, performance review is a responsibility that stays with you; it cannot be delegated. However, you should be aware that there is a mechanism through which employees can legitimately weigh in on the workplace performance of others—including their own bosses. It’s called 360- degree feedback. With this appraisal method, anonymous information about an individual’s workplace performance is collected from people who regularly interact with that person: subordinates, work team members, and “internal customers.” In most cases, 360-degree feedback provides an assessment of an individual’s performance that is more balanced and informed than the traditional boss’s assessment of a subordinate. If your company uses “360s,” you may have access to some overview material from these reviews (the details are usually confidential for the person being reviewed). Still, the formal appraisal of an employee’s performance measured against his or her objectives is a task that stays with the manager.

High-performance work teams, especially those paid on the basis of measurable output, are intolerant of members who will not or cannot carry their own weight. For example, work teams at Nucor Corporation, a highly productive and profitable steelmaker, have a reputation for being very self-directed and self-disciplining. Because inefficiency by one person hits all team members in their pocketbooks, slothful members are pressured by their peers to either clean up their act or look for work elsewhere.

Certain Tasks That Have Been Delegated to You by Someone Else

Let’s suppose that your boss has delegated a job to you: She wants you to make an analysis of all suppliers used by your division, noting the level of business each does with all departments and examining the record for possible conflicts of interest. Normally, you could sub-delegate the task of compiling a list of suppliers and their sales to one of your subordinates, assuming that you have someone capable of doing the job correctly. However, this may be a situation in which your boss (or someone else) has delegated the job to you with the understanding that you alone will handle it. Perhaps the job requires a level of trust or confidentiality that the boss sees you as uniquely qualified to handle. Perhaps it’s a sensitive matter, or, for political reasons, the boss wants someone with managerial status to be seen doing the job. Whatever the reason, you must be alert to situations of this type and recognize that you must handle it yourself. If you are not sure, ask your boss.

TAKE A BALANCED APPROACH TO THE DIRTY WORK

If your workplace is like most others, there are lots of different tasks to be done. Some will be interesting, motivating, and educational; others will fall in the “dirty work” category—the type that no one wants to do, because they are either boring, physically taxing, or otherwise unpleasant (e.g., dealing with a dissatisfied customer). As you consider the tasks you’d like to delegate, save a few of these unlikeable ones for yourself. You’ll earn more respect as a leader if people see that you are willing to share in the hardships and not keep all the most pleasant and appealing jobs for yourself. Also, when delegating tasks, spread the dirty work around. Don’t give all the desirable jobs to one set of people and all the unpleasant or undesirable ones to another set.

Richard A. Luecke (Salem, MA) is a freelance business writer and publishing executive whose articles have been published by Oxford University Press, John Wiley Sons, and Harvard Business School Press. He has negotiated over one hundred contracts with individuals, businesses, and non-business institutions. He is the author of The Manager's Toolkit and The Entrepreneur's Toolkit.