Where Do You Want to Go? How to Create Your Own Job

by Paul Brown, Charles Kiefer, and Leonard Schlesinger May 11, 2020

More than 20.5 million Americans are without employment right now, and the unemployment rate is the highest it has been since the Great Depression. Pretty devastating news.

Many are faced with two options:

Turns out around 27 million people across the United States have chosen the latter option.

According to the authors of Own Your Future: How to Think Like an Entrepreneur and Thrive in an Unpredictable Economy, found that the fear of being out of work and getting fired are some of the most common reasons people become entrepreneurs.

“I started my business, The Fresh Diet, because I was about to be out of a job (I was working in real estate in 2005 and could see that the bubble was about to burst) and I did not want to have to find a new one. I was twenty-five with a four-year-old daughter and a son on the way. I was in no position to be unemployed, but I couldn’t imagine having to work for someone new.” - Zalmi Duchman

Paul Brown, Charles Kiefer, and Leonard Schlesinger suggest that those who want to create their own jobs need one very important thing to start: an idea. 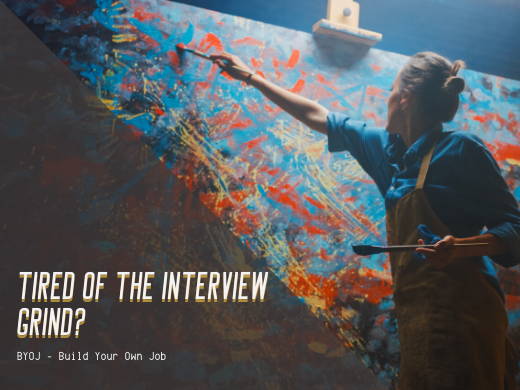 It Boils Down to Desire

Brown and his contributors contradict the typically prescribed destination, which is asking yourself: “What am I good at?”

“It’s certainly an adequate place to start . . . but probably not the best,” they write in Own Your Future.

Knowing who you are, whom you know, and what resources you have—your “current reality,” to reduce all that to a single phrase—is a very good thing. However, the very best first step is to instead ask, “What do I actually care about?”

It’s pretty obvious, actually. Desire motivates you to act. It makes you persist when you encounter obstacles. The net takeaway: Desire makes it more likely that you will create an idea.

You always know what you care about. Always.

Your desires will break down into two types. There are those things that we can call “Ultimate” Desires—things you want simply because you want them. They can range in intensity from those things you’re just interested in (“It would be really cool if . . .”) to those you would die for. But the defining characteristic is that you actually care about “it.”

You hear yourself saying, “I have to be an abstract painter (or architect, or engineer, or doctor, or worker in the local women’s shelter) or I am going to be absolutely miserable.” When you have an Ultimate Desire, guess what? You already have an idea. (“My favorite thing in the world is playing with numbers to solve or understand something.”)

What you’re actually searching for is how to do it.

What you are looking for is an acceptably low-cost next step, within your means at hand, to make it a reality.

So don’t get confused. Don’t say you don’t have an idea. You do. (“I want to play with numbers.”)

You just haven’t developed the next step. (“I am not sure yet what the job that will allow me to do that looks like.”)

The thing you most need to do at this point is figure out how to get moving. The second kind of desire is when you want something because you think it will bring you something else.

Here’s an easy example: “I really like the idea of starting my own firm, not because I want to run a company, but because I think that’s going to provide me with gainful employment.” (Or make me famous, à la Mark Zuckerberg, or ensure that I never have to work for anyone else again in my life.)

The specific thing isn’t what you want so much as what you think it’s going to lead you to. Think of these things as “Instrumental” Desires, things that you want because they lead to an Ultimate Desire. These are the cases in which you need an idea.

How to Find Your Job Idea

After every action you have new opportunities, potentially new partners, and fresh ideas. If you are sitting around your kitchen table and not acting, nothing happens.

How could this acting your way into a solution work?

Well, do you like to cook? Whip up six different versions of the same recipe and hold a blind tasting at the church bazaar. Could you do something with the one recipe that everyone loves?

See a problem that no one has solved? Sketch out a solution and talk it through with people who have the problem. As a result, maybe your “personal shopper service” morphs into a high-end house-sitting business. Perhaps your restaurant idea turns into an idea for providing frozen, ready-to-eat meals for people with severe dietary restrictions.

Sure, ideas can arise in a flash of insight. But more often (and more reliably) your Ultimate Desire will surface and your idea will develop through your interactions with other people or the marketplace.

You don’t need the idea as much as you need to get started. Worst case? You take a few tiny steps and discover you don’t like what you’re doing. Or it’s impossible. If that happens, you reboot and move on to something else.